We saw in the article Trading misconceptions (ii): Spreading out trades the cost of opportunity of splitting the entries. Now, we are going to explore the same strategy but applied on the profit target, commonly known as taking partial profits. Most traders who join this technique to their strategies set several static targets as high probability areas based on foundations such as resistance/support levels, or length ratios between adjacent movements, among others. The most likely reason to proceed in this way is to emulate the source/s which the trader learned from. This is very common in disciplines such as trading or poker: learning from someone who is (or seems to be) successful, and then acting by imitation. Although this is fine, any trader should analyze any single decision concerning a strategy in order to understand the underlying motivation. Any winner strategy has room for improvement by identifying what it is known as leaks.

Despite selecting the best parameters should not only consider the return but also the variance and the stability to small parameters variations, in order to simplify we assume the optimal corresponds to the absolute maximum of the return curve.

Given a profitable entry setup, and if we fix the stop loss level, the expected value as a function of the take profit level follows a kind of bell curve. On the other side, the variance tends to increase the farther is the target. The graph below illustrate this behavior on a setup where the take profit/stop loss is ranging from a ratio of 2:1 up to 60:1. Note that this focuses on the expected value per trade, which is not the metric we should optimize as we will see. 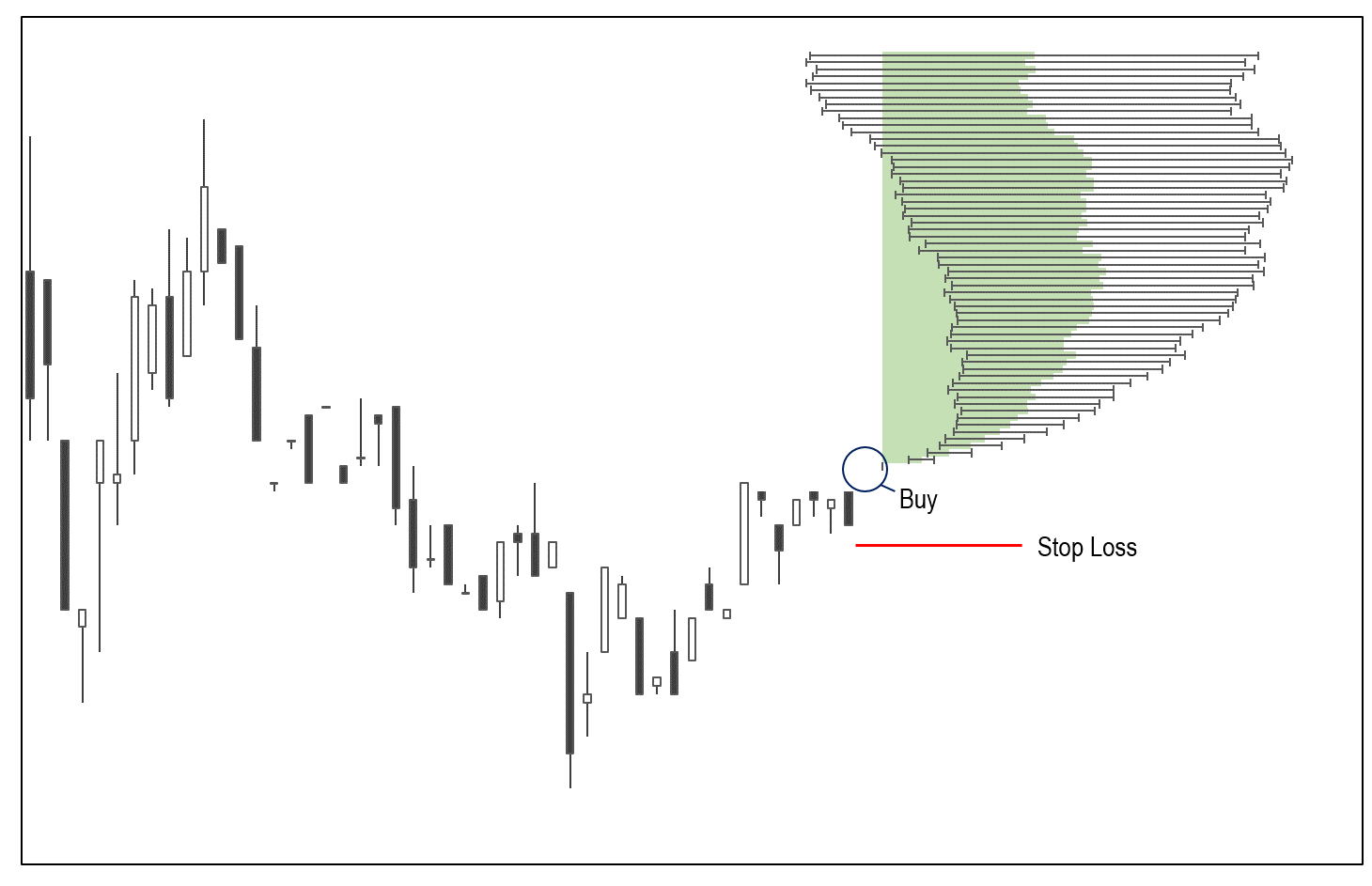 Trades are not independent events in a strategy because of their relationship with the money management. They freeze funds while alive, preventing from opening new positions or forcing to set lower sizes, and their lifetime does not scale as their EV.  This is depicted in the graph below, where the metrics EV per trade, cumulative return, and number of trades, have been scaled to [0, 1]. For this example, we can see that the cumulative return reaches its optimal point with the EV per trade still a 15.03% under its top. The reason is that, the number of trades when setting the take profit target for the optimal point of the metric EV per trade, is a 20.97% lower than when setting the target according to a suboptimal EV per trade. 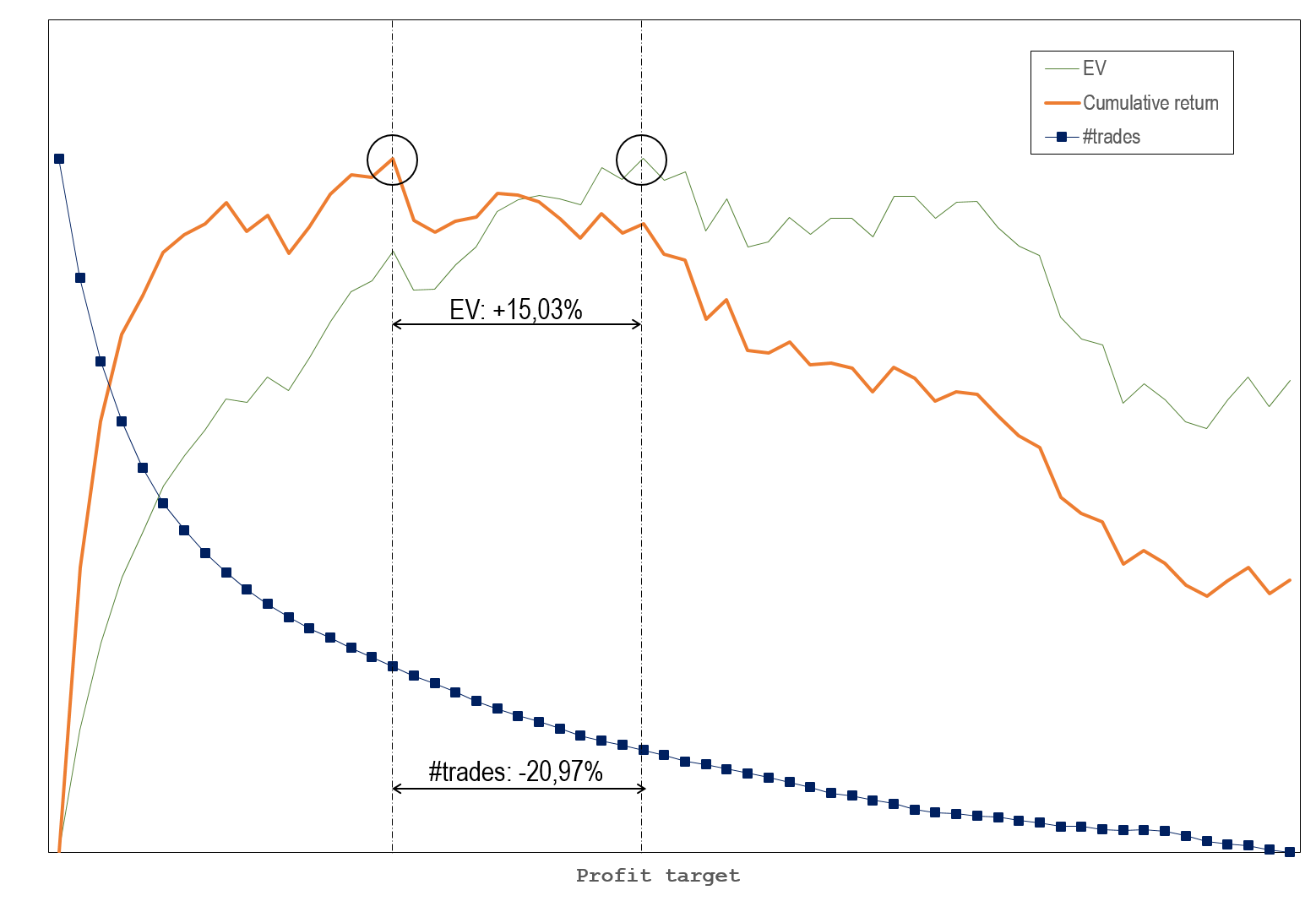 I have simulated a strategy based on the data presented before with the following setups:

Have a look at the results. Taking partial profits when the targets are in the surroundings of the optimal area has a minor effect. In fact, in this case study even outperforms the strategy taking full profits, but just as a consequence of variance. However, be careful if your closest target is too conservative (far from the optimal area), since the effect on the performance could be drastic. This is relevant because the use of this technique comes from the hand of not having a backtest where the design space is properly explored, and it is likely to set targets that ensure a high hit rate to create the deception of being doing well. 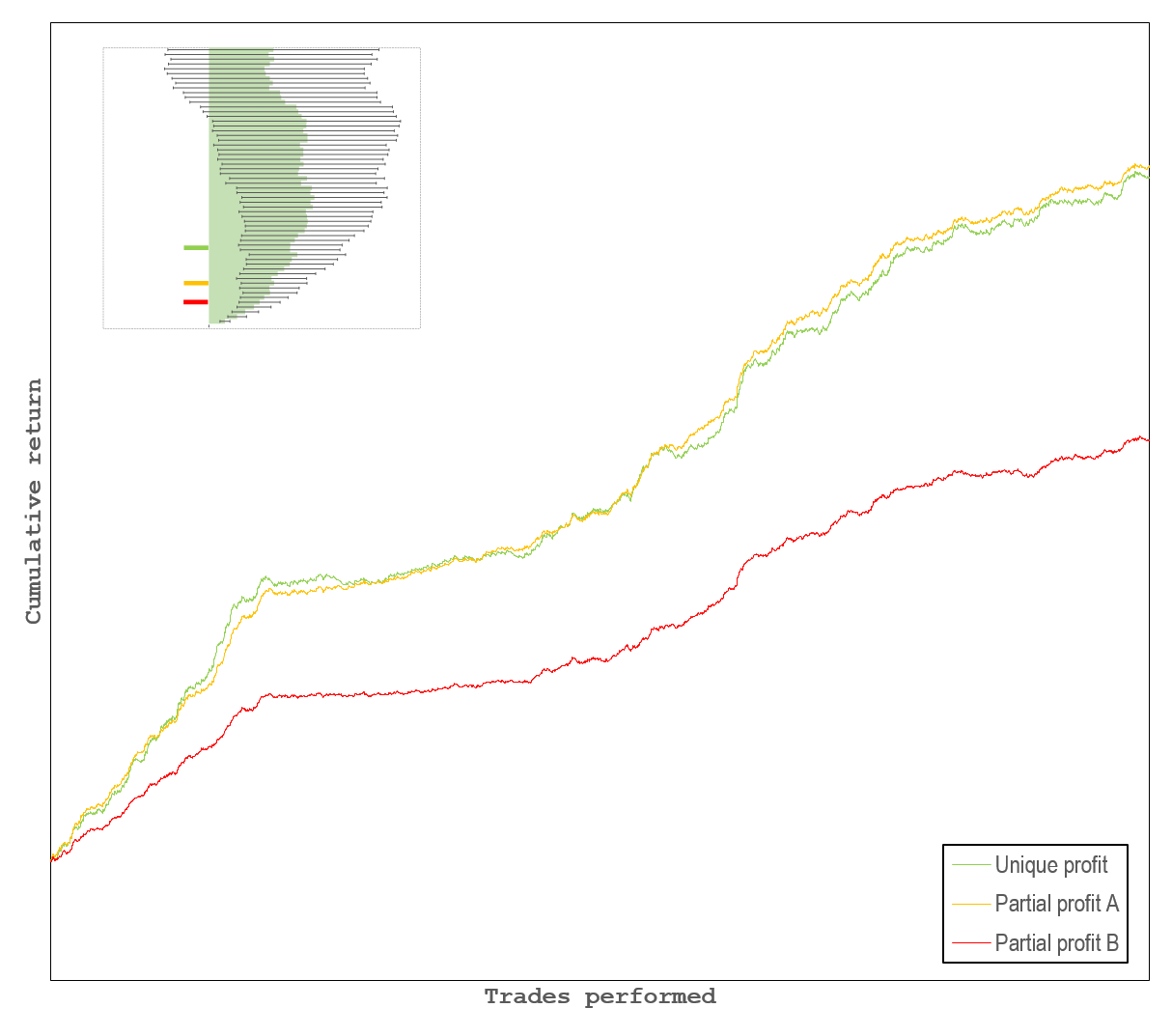 Finally, do not ignore the potential impact on the operational cost that this technique may cause in some cases. For example, in those rates consisting in a fixed amount and a variable amount depending on the trade size, or also when it forces to use more expensive products in order to increase the granularity.